Friday afternoon Seth and I headed down to Ashland, Oregon so that Seth could run the SOB 50K on Saturday. When we arrived in Ashland, we immediately parked downtown and headed to the local running store, Rogue Valley Runners. Seth picked up his shirt, and then we headed to the hotel to check-in and figure out where to eat. Ashland is  known for not being very dog-friendly, so we asked at the front desk about pasta places (gotta carb load before the race!) that do take out. One of the girls working recommended a small locally-owned place called Wiley’s World. Wow. It was FANTASTIC! They make all their own pasta from scratch, and many of their dishes are organic. They also have many gluten-free and vegan choices. Seth ordered some pasta primavera and strawberry-rhubarb cobbler, and I ordered spaghetti and marinara with meatballs. We waited outside with Sailor for our dinner and in the 20 minutes we were out there the entire place filled up!

Saturday morning I drove Seth up to Mount Ashland Ski Resort for the start of the race. Now, usually I drive to as many aid stations as I can to cheer on Seth, take pictures and bring him supplies. However, for this particular race, the runners weren’t allowed to have a crew. So instead, I headed back to the hotel and went back to sleep for a bit. After a nice nap and some breakfast, I headed back to downtown Ashland to hit up a fabric store and yarn shop. Obviously, no trip would be complete without a crafty stop somewhere! The fabric shop was phenomenal and I ended up buying some really awesome fabrics. The yarn shop was pretty awesome as well, and I picked up some yarn to weave fabric for a bag. More on those in a later post!

Seth had told me that he thought he would finish the race in about 7 hours, so I left the hotel and aimed to be there about an hour early to hopefully catch some other local runners crossing the finish line. When we got back up to the mountain, I parked, grabbed the camera, leashed up the dog and walked to the finish line with my chair and a bowl for Sailor fully expecting to sit and watch for an hour or so. As I was walking, I recognized the voice of one of the other local runners and turned around to say hello. Well, wouldn’t you know it…he was talking to Seth! Seth ended up finishing in 6 hours and 2 minutes! So…needless to say, I don’t have any pictures of him crossing the finish line! But, I do have one of him and Sailor hanging out at the ski resort.

And here’s a view facing the other way, of Mt. Shasta in California:

Look really closely, Mt. Shasta is the snowy one in the middle that is barely visible.

We hung out for quite a while at Mt. Ashland Ski Area chatting with the other runners. When we got back into town we went to a great pizza place that had outdoor seating that allowed dogs. Delicious AND dog-friendly!

This morning we headed home with a detour through Crater Lake National Park. The East Rim Drive is still closed due to snow, but we drove up the West Rim Drive and took lots of photos and enjoyed the GORGEOUS weather!

View from the Rim Village 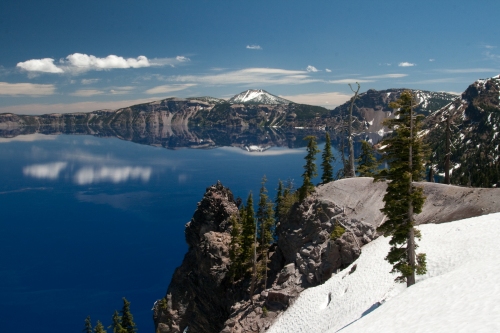 I won’t make you suffer through a hundred more pictures of the lake! But how about a sneak peek at the Flamboyan Shawl and a shot of the ridiculous snowbanks at Crater Lake?

I’ll do a Flamboyan post tomorrow! Hope you all had a lovely weekend!