I knew immediately that I wanted to use them to weave a scarf and I certainly wasn’t disappointed with the result!

Notes: I wasn’t sure if the Roslea Organic was going to be too thick to weave or if it would lose some of it’s softness when woven. It actually ended up being perfect. It’s wonderfully soft in woven form and makes a really warm scarf! Now, if only I could get my hands on some more Roslea Organic!

This is headed to the “holiday craft fair pile”

In non-fiber arts news, we took a little drive to the coast today with some friends of ours. The main goal was to buy some tuna off a tuna boats for canning! Yes, we’re canning our own tuna (apparently I’ve become the crazy canning lady!)….more on that after we actually do the canning tomorrow! After picking up the tuna, we headed to Seal Rock State Park to eat some lunch and let Sailor run around like a crazy dog. And run like a crazy dog, he did… 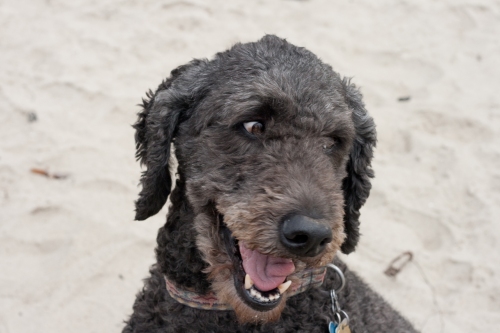 Not only was there running around, there was also some not-so-sneaky food stealing! bad dog.

Sailor wasn’t the only one running on the beach:

E showing off her leaping skills 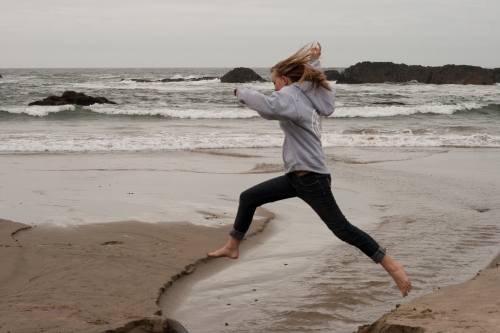 There’s a good possibility that I made her do this multiple times just so I could snap a photo!

Hope you all are having a wonderful weekend! I’ll be back with a finished baby sweater and a canning tuna update soon!

46 jars to be exact. And that’s not counting any of the ones that Seth has already eaten or that we’ve given away. Today we made 2 more batches of jam….strawberry and strawberry/blackberry. If there’s a jam crisis of some sort, we’ll have more than enough to share!

I also did a huge amount of sewing today. There’s a new yarn shop called Stash coming to town, and I’ve very pleased to announce that they’ll be carrying my quilted project bags! I’ll also be making some smaller drawstring bags for single skein projects. I pieced together 6 quilted project bags today:

There are many familiar fabrics, but some new ones too!

I recently picked up a whole bunch of Lizzy House fabrics from both her 1001 Peeps line and Red Letter Day line. I’ve been itching to break into them, so today I used some of them! 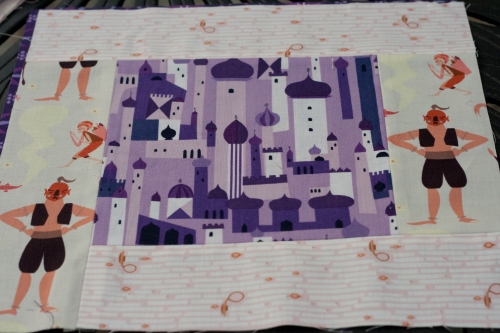 I love the genies!!

I’m excited to see all the bags completed!

There’s also been a bit of knitting going on….a ravelry friend just gave birth to her first baby this morning, and I finished up a little baby vest just in time.

Yarn: Handspun yarn from Two if By Hand’s Organic Merino in “Life is a Session”

Modifications: My yarn was a little bit heavier than the pattern called for. I followed the directions for the 3 month size and ended up with something between the 3 and 6 month size. This is why I love baby knits. The baby will grow into it at some point!

The cable doesn’t pop as much as I’d like, but the handspun is so pretty knit up!

Last night I decided to cast on for a hat using the leftovers from my most recent shawl and cowl:

I’m in love with the color combination. Both yarns are Merino/Cashmere/Nylon, so although the weight is slightly different they seem to be working well together. The pattern is really addictive…speaking of which, I’m off to go work on it for a while!

I feel like I’ve been talking a lot about food…

I swear, this is still a knitting/spinning/sewing/crafty blog! It just happens to be that time of year when our garden is producing all sorts of goodies and we need to do something with all of the veggies!

I think I’ve mentioned that we’re using a raised bed in our neighbor’s yard for green beans and pumpkins. Seth made it very clear this spring that he wanted TONS of green bean plants. Well, we have TONS of green beans due to all these plants. All of our plants that we grew from seed started producing beans a couple of weeks ago and now Every. Single. Plant. (about 15-20!) is producing beans. We picked a quart sized ziplock bag full the other day and then easily picked twice that today.

We’ve been having trouble deciding how to preserve the beans for the winter, since we obviously can’t eat all these before they go bad! Seth requested something spicy and flavorful instead of just canning or freezing as-is. When I was browsing around Borders the other day I picked up “One Big Table” by Molly O’Neal. It’s a gorgeous (and heavy!) book with 600 recipes from around the country. It also has beautiful stories about the history of food in America. Almost as soon as I started flipping through it I found a recipe for Dilly Beans and knew immediately that we could make them with the abundance of green beans we have!

The recipe called for 4 lbs of green beans, but we only had 2 lbs so I halved the brine recipe and used half the amount of spices for the jars.

Some of the jars waiting for the brine

We didn’t pack the jars as tightly as they must have in the recipe and we ran out of brine. Thankfully, it was easy enough to whip up another small batch of brine and pour it in the last couple of jars. We boiled them in the canning pot, and now we just have to wait a month before we can try them! We could eat them before then, but the recipe recommends waiting 30 days so that the beans can absorb all the flavors from the spices and brine.

While we were waiting for the second batch of brine to finish simmering, we also tried a salsa recipe from “One Big Table” with some tomatoes from the garden and cilantro from our little herb pot. 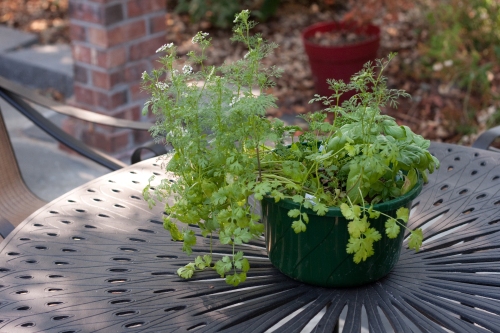 The recipe called for 2 large tomatoes, 4-5 jalapenos, a couple cloves of garlic and some water to be tossed into a pot to simmer for a bit: 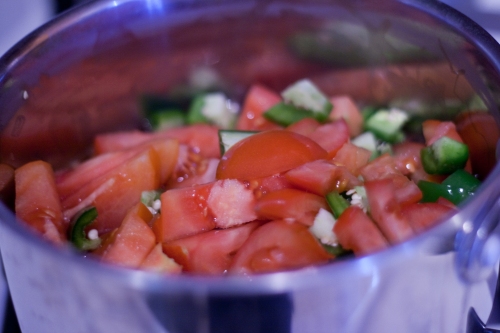 After it was done simmering, we strained out the veggies (and reserved the water), put them in a blender and blended in the cilantro. Seth liked the consistency, so we didn’t add any of the water….but the salsa was HOT! Seth’s tolerance for spicy food is pretty high, so it really spoke to the spiciness when he said it needed more tomatoes. We tossed a large handful of cherry tomatoes into the blender, and while it did thin out the salsa a bit the consistency was still pretty good.

Next time: More Tomatoes, less jalapenos! Then maybe it won’t look so green!

I believe I promised some pictures of the sweater I’m working on!

Shadow is knit in pieces, so basically it just looks like a big cabled rectangle so far!

Let’s see…what else is exciting in the crafty department? Oh! I got a whole bunch of new fabrics in the mail today, so keep an eye on the blog and shop for some bags with new fabrics!

Hope you all have a lovely holiday weekend!

This evening two bucks decided to hang out in our yard munching on plants! Seth saw a van parked out in front of the house and then casually said, “there’s a deer eating a bush in the front yard.” I took a peek and then went running to grab the camera. I wasn’t sure if the pictures would come out since I was taking them through the front window, but they actually didn’t come out too bad! Thankfully Sailor didn’t notice them, otherwise I’m sure their visit would have been much shorter!

This guy didn’t stay quite as long, but he had a good snack under the Japanese Maple! 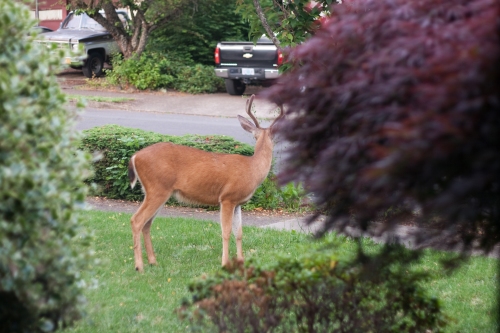 Cool, right?! I saw our neighbor when I brought Sailor out tonight and she said she’s seen a group of 3 bucks in the neighborhood in the mornings when she walks her dogs.

In other news…the canning season has begun!

Seth and I made some strawberry jelly from the 25 lbs of fresh strawberries that we picked last week. We ended up with 9 jars of regular strawberry jelly and 1 jar of strawberry-raspberry jelly. We didn’t quite have enough strawberry for a full 10th jar, so Seth ran out to the raspberry bushes in the yard and added enough raspberries to fill the jar! 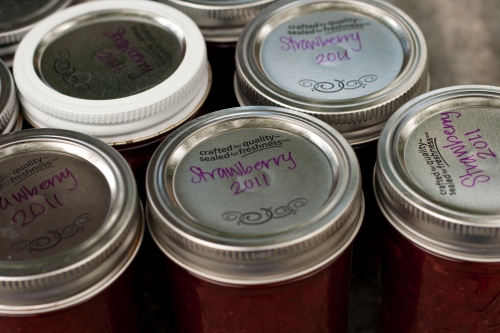 Last summer we picked up The Big Book of Preserving the Harvest, and it has great recipes and tips for canning/preserving all sorts of fruits and veggies. We won’t have too much more to preserve before the end of the summer….it all depends on how well the garden does. Last summer and fall we made several kinds of jelly, made applesauce from the apple tree in the yard, and canned all the pears from our pear tree. I’m hoping to be able to make pickles with the cucumbers in the garden this year, and maybe some tomato sauce to save for the winter.

I finished another woven scarf today! But no pictures yet since it was dark by the time I finished. Pictures to come soon!